Overview of the Book of Daniel

The first look at the book of Daniel is exciting and tough at the same time. It is complex in its historical and prophetic account of things now past, and things to come. Chapters 8 and 11 have some sections that are hard to distinguish between the historical figure Antiochus Epiphanes and the Antichrist. There is an initial excitement when reading about the details of the future, which is natural. After all, who else in this world can claim to know the future? However, it is also important to see the big picture of Daniel. God wasn't just telling Daniel about the Endtimes, but was giving a timeline of all future world kingdoms leading up to the Messiah's second coming in power and glory. Of course the timeline is not absolute (dateable), but relative. There are no dates, but there are successive events in relation to successive kingdoms. The fourth kingdom (Rome) has come and gone, although we still have remnants of Roman culture in much of the world today. We only wait for the reviving of that empire in a new form to usher in the antichrist. It seems that as of this writing (2002) we don't have to wait any longer, as the European Union now controls much of the territory of the Roman Empire, and it seems will fulfill the prophecies in Daniel.

Context is everything in the book of Daniel. The book is organized very logically once the context and purpose of the book are known. The key to the book is revealed in the relationship between the future Gentile dominion and the Jewish historical context. In other words, understand what God was doing with the Jews and the World, and you'll understand the book of Daniel. The Jews were in a very special situation. The Jewish nation had a theocratic government, as opposed to democratic, dictatorial, or monarchical. Since God had given them the land they were not subject to anyone but God. God was making Himself known to the world through the special nation, inspiring the word of God, and doing mighty works. As far as the Jews were concerned, this was going to go on forever, and it could have. (Until the eternal state)

However, God began to speak through the prophets warning the Jews that they were far from Him, and if they didn't turn back to Him, they would be scattered in judgment. The natural effect of being scattered would be that they would be subject to authorities other than God. Isaiah prophesied God's message to the Northern Kingdom of Israel, and Jeremiah to the Southern Kingdom of Judah later. The people didn't listen to the prophets, so they were scattered to Babylon and Assyria. They lost their special theocracy. If they wouldn't serve God, they wouldn't have their nation. They had no temple, no Levites, no High priest, and no sacrifices for sins. God made a change. Because of their disobedience He said that they were going to be under the dominion of Gentiles until the end. This seems harsh but God gave them many years to repent, and He did forewarn them that this would happen if they didn't obey Him. They didn't have such a special relationship with God that they could continually disobey Him. He chose them, they didn't chose Him. He therefore had the right at any time to remove His hand of blessing. He would never forsake them forever though. That was an unconditional promise made to them.

They went into exile with their new prophet Daniel. God used this time in exile to explain to Daniel that the rule of the Gentiles was not going to be just the 70 years of Israel's captivity, as prophesied in Jeremiah, but 70 times 7. This contained a gap between the 69th and 70th weeks that Daniel probably didn't see. The gap of course is the church age, which wasn't seen by the prophets, but was clearly part of God's plan.

The book of Daniel then shows God's plan to give dominion over to the Gentile nations until the time of the end when the full plan would be sealed up or finalized. It doesn't exclude there being other kingdoms in other parts of the world. The world empires described in Daniel are all kingdoms that encompass the land of Israel. Also note that the book of Daniel clearly shows God's sovereign control over the Gentile rule. God hasn't just left the planet only to show up again at the end. The book of Daniel shows the rejection of the Messiah by the Jews, the future destruction of Jerusalem, the reign of antichrist, and the coming triumphant Messiah who is given an everlasting Kingdom by God. Atonement is done, prophecy and visions are no longer needed.

Chapter 1 - Sets up the historical background and introduces Daniel and his friends.

- First glimpse of the prophetic purpose of the book. The first prophecy is given to Nebuchadnezzar, and pictures the future Gentile empires in a nutshell, the statue. It leaves out the hidden part of the fourth kingdom and antichrist. (Babylon, Medo Persia, Greece, Rome and the Millennial kingdom.) The whole plan is not laid out yet, just the basics. He sees four kingdoms from Daniel's time, and then the Millennial kingdom. Now the news is out that God is giving the Gentiles world dominion.

- Building on this new truth, that the Gentiles will have dominion, God shows us and Daniel that even though Gentiles are ruling, He is still sovereign and in control. This truth is acknowledged by Nebuchadnezzar when he credits God with being the one that gives and takes away dominion and authority.

- We're back to the purpose of the book of Daniel. An expanded vision is given to Daniel. This time there is an added feature, the fourth kingdom evolves into a fifth kingdom, and has an individual that is singled out for some reason. This individual speaks blasphemous words. While introducing this new element, God also lets us know that this individual will be defeated. This would have been important to Daniel and to future readers of the word of God. Daniel 7:9 shows the Ancient of Days, God the father taking His seat, and the Son of man coming before Him to receive the Kingdom. Interesting how the angel encapsulates the context of the revelation when Daniel asks him to explain the meaning. The angel tells him that…

He makes it clear how simple the message is. Of course there are lot of complex details under this umbrella, but they should always be kept underneath the truth of what the angel tells Daniel. God had ordained that Gentiles would rule from Babylon until the second coming when the Son of man would destroy Gentile rule by smashing the nations into dust. From Daniel 7:19 to the end we have details about these various kingdoms. Remember that the nations in general never follow God. As a group they always reject God and create their own gods.

- Daniel is asking "Why aren't the people returning to the land of Israel?", and God gives the prophecy of the seventy weeks, indicating to Daniel how long it would take to bring an end to God's plan for the nations, and sin.

- Daniel learns of God's protection of His people through angels.

Chapter 12 - Daniel is assured that it will all happen, and it is all true.

What amazing truths did Daniel himself learn from his own prophesies? 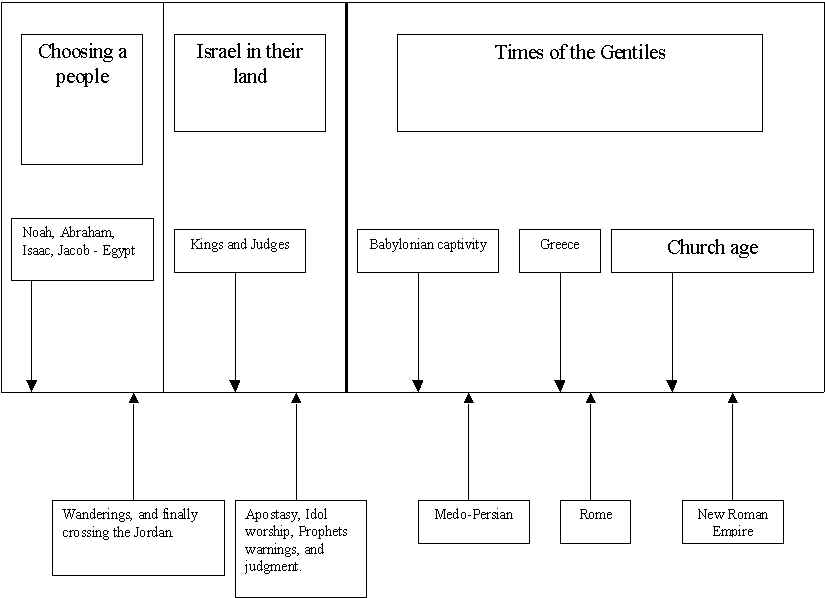